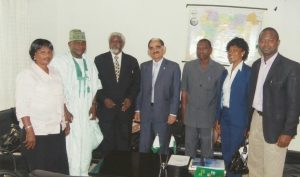 Our major performances since the inception of the establishment of African Peace Foundation centered upon the ways and manner to pursue vigorously the aims and objectives of which the foundation was established.  However, the under-listed achievements as recorded so far were with the help of our able Trustees, Executive Council Members, local sponsors, collaborating partners and peace loving individuals.

We organized peace seminars, workshops and forums to educate and re-orientate the public on ways and manner to achieve peaceful resolutions through diplomatic approach e.g.

In our effort to unravel the remote causes of conflict and crises globally,   we have written a 860 page compendium called “Middle East Crises“ in two volumes, (a custodial of intellectual heritage) that traced the genesis of the crises in the Middle East especially that of Israel and Palestine to the present day road map.

Our 467 page book titled; “PEACE CULTURE” a monumental evidence for global co-existence in a new world peace order is aimed at conflict resolution, providing A – Z mediation, and laying a solid foundation for global peace building is a manual for all.

Our skill acquisition programme aimed at minimizing the influx of refugees in various Refugee camps in Africa has been a pet project of     African Peace Foundation since inception.  This training programme was carried out in Ghana, Ethiopia, Sudan, Niger Republic, Uganda, Nigeria (Oru Camp) etc. crises and wars, we mobilized one hundred volunteers from one country to another to produce a data of victims of any kind of crises   or war anywhere in Africa in order to provide for them medically, in cash or kind including their widows, orphans, handicaps etc.

In our contribution to world peace development, peace building and good governance, we embarked on a two year research and produced an economic road map called “Obasanjo reform”.  An eight hundred  page compendium from one sector of the economy to the other.

Our WORLD PEACE CONFERENCE is yearly organized in Africa from one country to the other as an academic research confab that is  aimed at producing a blue print for stability, economic development,  democratic sustainability and Universal Culture for Peace and Development.

THE MEDIATORS:  In our strategy to resolve impending conflicts,   African Peace Foundation since 2009 has been running a mediation programme on Federal Radio Corporation of Nigeria (FRCN) titled:  “The Mediators”.  On this forum, issues on peace and conflict resolutions are discussed.  This is in addition to a jingle running on air to condemn violence and promote peace.  The airing of this jingle   on radio, we plan to expand from one country to the other from 2011.